An experiment for all our fair readers, though not one to be conducted at work: turn off all the ‘Safe Search’ options on your browser and do an image search for ‘Job’.  At least on Google, this yields a fascinating slice of the mainstream culture – at least that part of it that is online – in the English-speaking world.  I’ve done this a few times after stumbling upon it looking for a painting by Marc Chagall last year and the results, though always shifting, are always about the same.

Well over half the images involve employment or ‘jobs’ in some way: 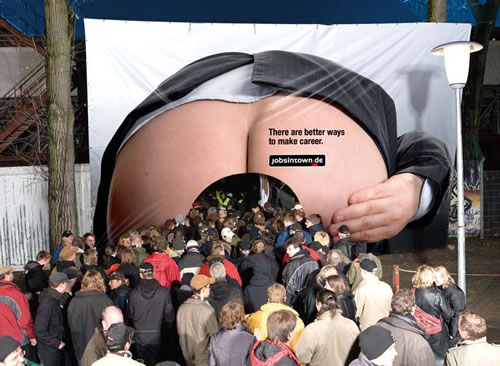 The other half are split more or less equally between illustrations from the Hebrew Bible book of Job and various pornographic categories – ‘hand job’, ‘foot job’, ‘boob job’, ‘blow job’, and the like (in the interests of propriety – I am an American citizen, and America owes a good deal to Puritan morality even today when so many other element of Puritan culture has passed into the mists of memory – I will leave the illustration of this final category to your imagination, which is filthier than anything I could find anyway, I reckon):

An illustration from Job by WIlliam Blake

There is something about this juxtaposition of the religious, the economic, and the pornographic that seems to perfectly capture our present cultural moment and its inherent contradictions.

It will be fascinating to do this on occasions over the coming months and even years to see if shifts in the larger culture alter the mix I found this morning (these two were taken from the first two pages of a Google image search results), or alter the proportions in which these three things appear.

‘The Internet has empowered the marginal, the talentless, and the librarian in all of us.  If punk gave everyone carte blanche to pick up a guitar and scream at the world, so the World Wide Web has allowed everyone the opportunity to share their small world-view with anyone with time to kill’.

The writer, the journalist Dylan Jones (From ‘Icon: Frank Sinatra’, GQ July 2007, p. 68), here gets at a valuable aspect of Internet content and its seemingly inevitable trivialising nature, something I have had to grapple with while working on this site.  But he is, on a more serious note, missing something equally valuable.

It is telling to take a good look at these two sentences and the way that they ignore the often ignored fact the Internet is not really a voice for everyone, but a potential and potentially limiting voice for everyone with access to a computer and a certain degree of technical know-how.  The same is perhaps true of punk rock, his earlier referent, but at least punk, which may have been accessible to more people as creators than, say, classical piano, but which was still limited by economic and other factors, made no real claims to being a world-wide or universal phenomenon.

The idea of the ‘World Wide Web’, and the ubiquity of the term itself, is by contrast a utopian promise, a dream not only of universal access but of universal participation in a major cultural forum.  That it has failed singularly in creating this utopia is so blindingly obvious that it perhaps should pass by without mention.  The fact that it makes this promise – and the fact that this promise is so often believed – is in itself very interesting, especially if we want to draw connections between the persistence of technological utopianism and the Christian tradition of eschatology that it grew out of.

The World Wide Web, in its very name, promises the democratisation of knowledge, despite the fact that similar claims were made about the telegraph, the telephone, the printing press, the railroad, the radio, and the personal computer, and despite the fact that these claims have never been validated, at least not without studiously ignoring the facts.  Indeed, such promises were made as far back in time as the emergence of the written word, which was itself reliant upon a series of potent technologies.  All of these things, especially the printing press, have had a democratising effect on the production and distribution of knowledge, but at the same time all of these things have also played an important role in the creation of new elites as well as new forms of cultural and technological poverty.  As James Carey writes,

There is, however, a more stringent sense of the meaning of a monopoly of knowledge.  When one speaks, let us say, of the monopoly of religious knowledge, of the institutional church, one is not referring to the control of particles of information.  Instead, one is referring to control of the entire system of thought, or paradigm, that determines what it is that can be religiously factual, that determines what the standards are for assessing the truth of any elucidation of these facts, and that defines what it is that can be accounted for as knowledge.  Modern computer enthusiasts may be willing to share their data with anybody.  What they are not willing to relinquish as readily is the entire technocratic worldview that determines what qualifies as an acceptable or valuable fact.  What they monopolize is not the body of data itself but the approved, certified, sanctioned, official mode of thought-indeed, the definition of what it means to be reasonable … Instead of creating a ‘new future,’ modern technology invites the public to participate in a ritual of control in which fascination and technology masks the underlying factors of politics and power.  But this only brings up-to-date what has always been true of the literature of the future.  This literature, with its body of predictions, prescriptions, and prophecies, is a cultural strategy for moving or mobilizing or arousing people toward predefined ends by prescribed means.[1]

Incidentally, we also must keep in mind that data, the Internet’s forte, is not the same as information, which is not the same as knowledge, which is not the same as wisdom.  There are more steps in the democratisiation of knowledge than simple access, as anyone who has read an undergraduate essay which cites only online sources will readily attest.  It is indeed one of the curious paradoxes of the Information Age that there is perhaps a greater degree of access to data than at any point in history at the same time that fewer and fewer people have access to the sorts of knowledge and critical skills that are necessary to navigate the morass of rhetoric, misinformation, and simple ignorance that is characteristic of the Internet.  However, this utopian rhetoric raises a serious question that is not granted enough serious consideration: given that significant numbers of people on this planet have never even used a telephone, just how world wide can the ‘World Wide Web’ possibly be?

In fact, it is possible to argue that the label  ‘World Wide Web’ is in reality another way of distinguishing the part of the world that matters – the world of the wealthy, the (largely) white, and the self-consciously modern – from the rest of the world in all of its poverty and backwardness.  This is nicely illustrated by a popular image from 2007 showing Internet access density (thanks to the artist, Chris Harrison, for making this accessible on his website):

This image puts the lie to the idea of a truly World Wide Web, as much of the world is simply missing, or sunk in darkness.  The areas that are portrayed as blank spaces on this image are sadly predictable and follow more or less exactly the patterns laid out by economic oppression and exploitation in global capitalism.  The same is true of the following visualisation, from the same source, this time documenting Internet traffic:

Here even more of the world simply fades into the blackness of technological backwardness, raising another very real question: is the Internet a part of the solution to the staggering problems that these maps speak of, or is it simply another part of the problem, another way of delineating the haves from the have nots?

In the end, the truly marginal are not the solitary toilers sitting in front of computer screens sending out their worldview for general consideration (and, we assume, validation), but are instead those who lack access to even the basic tools that advertising and other interested cultural forces have told us are necessary for authentic communication, not to mention the billions who lack access to clean water, basic health care, or simply enough to eat.

Though this may seem to be taking all of this in the direction of conspiracy and needs a good deal more investigation to be anything more than conjecture, I want to suggest that the label ‘World Wide Web’ is both a utopian promise and a shield from precisely this sort of criticism.  This, of course, is the result of a range of factors and not simply a choice made with the deliberate goal of creating and maintaining socio-economic inequalities, but that doesn’t make it any less damaging.  There is no reason to be a Luddite about all of this, and no need to retreat to a facile, outdated technological determinism; there is, however, a real need to pay attention to the cultural and economic aspects of information technology, from the quill to the computer on which I write these words.  As Erik Davis writes, resorting to what is a not unjustified hyperbole, ‘Without turning to face our own terminal screens, without sharpening critical wisdom and cultivating compassion, the Internet may only become a new brand of bondage’.[2]

McLuhan, and those, like Baudrillard, who were influenced by him, have made this point over and over again, and made it well: technology is never ideologically neutral, and to think otherwise is indeed dangerous.

[2] Erik Davis, TechGnosis: Myth, Magic and Mysticism in the Age of Information (London: Serpent’s Tail, 2004): 380.  He elaborates: ‘In the long run, I suspect that some of the most valuable and productive aspect of postmodern thought may lie in its confrontation with digital technology, whose alien cunning it helped to articulate and whose posthuman possibilities it helped to unfold … cyber-culture also embodies the channel-surfing decadence, depthless fragmentation, and smug obsession with self-referential codes and jargon that characterize postmodern culture at its worst.’  Davis, Tech, 388.

The Dunedin School would like to invite all of you to a public lecture sponsored by the University of Otago’s Department of Theology and Religion:

Dr. Campbell has a PhD in Practical Theology and Computer-mediated Communication from the University of Edinburgh-Scotland and is been an active researcher studying religion and the internet. She is author of Exploring Religious Community Online (Peter Lang, 2005) which explores the relationship between online and offline Christian communities and implications online religion has for offline faith communities and religious institutions. She is also co-editor of A Science and Religion Primer (Baker Academic, 2009) an introductory resource to the study of science, technology and religion and author of the forthcoming book When Religion Meets New Media (Routledge, forthcoming 2010) on how religious communities negotiate their use of new media. Dr. Campbell writes about her research interests also in her blog: When Religion Meets New Media.