Here are two good reviews of R. Crumb’s Genesis comic, from two of Berkeley’s Jewish Studies professors. The first review is by Robert Alter, on whose translation of Genesis Crumb largely bases his own text.

“Crumb has always been an artist with a single style, a distinctive and emphatic one–in this regard as in others he is certainly no Picasso; and so it should neither surprise nor disappoint us that he has used his style to interpret the Bible. His women have always been broad-shouldered, big-breasted, thick-lipped, erotically energetic figures with the physiques of NFL linebackers, and that is how his biblical women, from Eve to Rebekah to Rachel, appear. The Crumb brand is certainly here; but in this signature visual idiom he has produced a frequently arresting interpretation of Genesis. I stress that it is an interpretation, because the extremely concise biblical narrative, abounding in hints and gaps and ellipses, famously demands interpretation… The Midrash, produced in late antiquity, is often an interpretive fleshing-out of the spare biblical narratives, an attempt to fill in the narrative gaps and read closely and imaginatively between the lines. And this is essentially what Crumb does graphically, with a special emphasis on the element of flesh.”

“What seems to have surprised many of the reviewers, including this one, is not only how “straight” Crumb played the Bible, but also how far from jolting even the most striking of these illustrations are, as if he were not imposing an alien and coarse modern sensibility on an exalted ancient text but rather uncovering a certain Crumbitude that had always been inhabiting it. There was, it seemed to me, an affinity between whatever it was Crumb stood for (sexual lewdness as well as emotional honesty, a fascination with the unbeautiful body, the interconnections between desire and vulnerability or beauty and power) and whatever Genesis had on offer.” 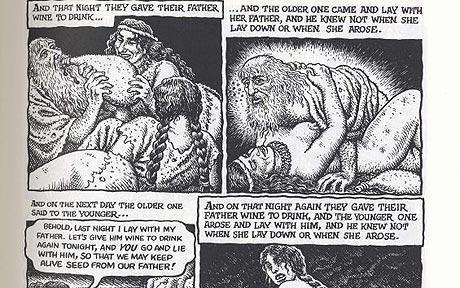