The Bible does not exist as such. In opposition to the question, “Why drag the Bible in on a subject [Cyborgs, Hauntology, and Spectrality] with which it has absolutely no concern?”, I could ask, “What makes you think the Bible exists – except as hauntology – as that which haunts some current discourse, being both repetition and first time, thing and simulacrum?”

There are so many such current discourses from which to choose an illustrative example. But here is one concerning a chimpanzee, or more precisely, the naming of a chimpanzee.

In an expedition which is frighteningly reminiscent of the New World’s slave-trading past, in the 1950s, the U.S. Space Program sent an expedition to Cameroon, Africa to obtain baby chimps to train as the first astronauts to be sent into orbit. According to some reports, their chimpanzee mothers were slaughtered to obtain their babies. The chimps themselves, of course, were chosen because they were considered dispensible, less than people. And many of them died in space or in training. 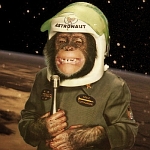 What did they name the first African chimp to be sent into space? Ham. Officially, “Ham” is just an innocent name, merely the acronym of the Holloman Aero-Medical laboratory in which the chimps received their training to be astronauts. So there would be no equation of the African monkey with the ancestor of the cursed race of (Black) people of Christian tradition. But the apparent innocence of the acronym is shown to be haunted by centuries of racism when we consider that the name given to the second chimp in space was also chosen from our primeval ancestors. His name was Enos (the Hebrew term for “man”).

So here – at the pinnacle of human achievement, among the most scientific of men, and barely a decade after those previous most scientific men of Nazi German had achieved their scientific acme – is the spectre of a racist and biblical  past. It is also a racism thoroughly integrated with science. The implied progression from chimp to black to man (that is, white man) is inherent in the names used within the U.S. Space Program, just as it was among the early evolutionists and anthropologists. The three steps could easily have been derived from Edward Tyler’s own text-book. The pattern is already there in the Table of Nations, dividing the world into three parts, and providing a foundation myth to naturalize the inferiority and servitude of thousands upon thousands of other peoples. Modernity added the scientific nature of the racism, but the teleological ideology of science also has its traces in biblical apocalyptic.

Donna Haraway (she of Cyborg fame) identifies the link between space-chimp and biblical tradition:

(The Haraway Reader, By Donna Jeanne Haraway, Published by Routledge, 2004: 92.)

Haraway understands the deep influence of the Bible in Western society. In this regard, she also notes that another chimpanzee in the U.S. Space Program, Chimp #65 was given the delightful name of Chop Chop Chang, “recalling the stunning racism in which the other primates have been made to participate” (94).

Today, as urgently as ever, we must speak with ghosts – engage in a spectral discourse – in order to identify injustices and in particular to identify the unfolding role of the Bible in creating injustice. In Jacques Derrida’s own, now spectral, words:

“No justice—let us not say no law and once again we are not speaking here of laws—seems possible or thinkable without the principle of some responsibility, beyond all living present, within that which disjoins the living present, before the ghosts of those who are not yet born or who are already dead, be they victims of wars, political or other kinds of violence, nationalist, racist, colonialist, sexist, or other kinds of exterminations, victims of the oppressions of capitalist imperialism or any of the forms of totalitarianism.”

(Specters of Marx: The state of the debt, the work of mourning, and the new international. Translated by Peggy Kamuf. New York and London: Routledge, 1994: xix.) 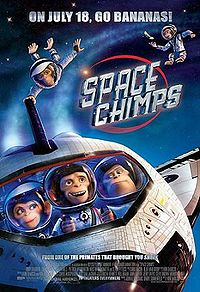 For if scholars refuse to recall ghosts, then the work may be left to others with much less critical memories, such as the memory-producing machine that is Hollywood. In the 2008 animation, Space Chimps, Ham III (the grandson of Ham) is picked by NASA for a space mission in which a group of chimpanzees must overcome the evil dictator Zartog on an Earth-like planet on the other side of the galaxy. Evil has been transferred to the other side of the galaxy, many light years from any association with NASA itself, who now appear on the side of intergalactic peace. That is one big transference of guilt! It need not be said that there is no explanation of the pejorative origins of Ham’s name and no appearance by Chop Chop Chang III the grandson of Chop Chop Chang. The institutional racism of NASA and of U.S. scientists has been forgotten and erased, purified and written out of the script. Wonder why? Perhaps somebody asked, “Why drag the Bible in on a subject with which it has absolutely no concern?”