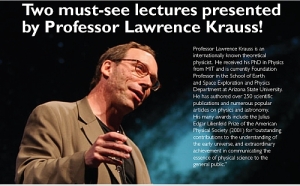 The distinction between science and fiction and between sense and nonsense has become blurred in popular discourse.

In the United States, in 2008, three Republican Presidential Candidates indicated that they did not believe in evolution and at least one of them indicated he was not willing to come down on the side of an earth that was older than 6000 years old – joining the majority of Americans.

Most recently, the popular debate about the teaching of intelligent design in public schools presents a perplexing quandary for scientists and policy makers. These misconception may affect the teaching of science, but other confusions, about climate change, and nuclear weapons, affect the peace and security of the whole world.

In this lecture Professor Krauss will explore examples from government and the media to explore these issues. He will also address the important issue of what science is, and what it is not.

And if you like that one, there’s a second lecture by Dr Krauss the following day, same time, University of Otago College of Education Auditorium.