In a well-known twist, what usually results from the illusory attempt to lead a pure and spiritual existence, free from material baseness, is an obsessive fantasizing about excreting, copulating, and other “lower” bodily functions.

For example, the more puritanical among the Sixteenth and Seventeenth Century Protestants were carrying on a long tradition of iconoclasm, one found in the biblical books, when they attempted to purify Christian rites of any material significance. The way they saw things, the Eucharist must be viewed as a spiritual remembrance which rendered the material bread and wine merely accidental or it would inevitably descend into gross and base literalism: the cannibalistic eating of the body of Christ. The nuanced Catholic conception of the symbol as something both present and physical, and yet absent and transcendent, got caricatured as gross materialism, via a fervant literalism that itself was responsible for creating the idol which it was criticising. 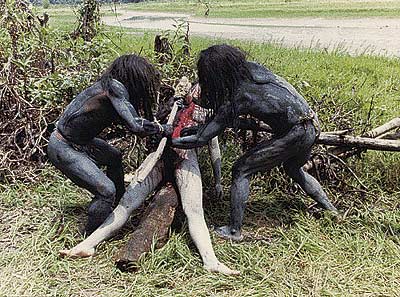 So John Milton, in On Christian Doctrine, warns that the Eucharist must be no more than an analogy for a spiritual process. The alternative, in Milton’s fantasy (although never conceived as such by his real rather than imaginary Catholic opponents), was idolatry and scatological obsession:

“if we eat his flesh it will not remain in us, but to speak candidly, after being digested in the stomach it will be at length excluded.”

(On Christian Doctine, 1.28; tr. in Maggie Kilgour, From Communion to Cannibalism)

Or, as Milton later caricatures the Catholic view, shuddering (with a secret delight?) to even think about it:

“when [Christ’s body] has been driven through all the stomach’s filthy channels it shoots it out – one shudders even to mention it – into the latrine.”

(On Christian Doctine, 6.560; tr. in Maggie Kilgour, From Communion to Cannibalism)

We’ve got both sides of the debate here, so it’s fairly easy to work out that Milton is misrepresenting the symbolic Catholic view. Perversely, it is Milton himself who is grossly obsessing on the materiality of the Eucharist. As Maggie Kilgour comments:

“in his attack on Catholic materialism he cannot resist the temptation of dwelling obsessively on bodily images, especially those related to the ‘lowest’ functions of eating and excretion. His own dualistic definition of communion enables him to indulge in the materialist fantasies he is suppose to be denouncing by projecting them outside of himself onto another group that he then attacks.”

(From Communion to Cannibalism, 84)

By contrast, in Isaiah 44, we don’t get both sides of the depiction of Babylonian worship, but just the Jewish caricature of the foolishness of idol-worship. But as George Soares-Prabhu questions in his article, “Laughing at Idols”: might there actually have been in Babylonian religion, behind this base caricature of idols,  “visual theologies of great depth and power”?

Might as well begin this blog with some thoughts on cannibalism – as good a topic as any for the Dunedin School. (Incidentally, what first whet my appetite for an exploration of cannibalism was the thirteenth chapter of the Book of Numbers, with its all-devouring landscape and giant-sized grape clusters.)

Mind you, this post has less to do with cannibalism than a typical academic reaction to it. The typical move of the human sciences, when faced with the unusual practice of eating other people, or indeed with any unusual or repugnant practice, is to ‘contextualize’ it. In this way, the practice is given an explanation within a network of cultural meanings and functions, and is fairly much sterilized as a result. But Anthropologist Don Gardner thinks that this contextualization can often be a thin cover for a subtle form of ethnocentrism. He argues the case in a very interesting article, ‘Anthropophagy, Myth, and the Subtle Ways of Ethnocentrism’ (1999). According to Don, when contextualization or thick description – and all those other standard practices of the human sciences – are carried out with the impulse to euphemize the ethical dimensions of the practices, then the initial unreflexive negative response is never really challenged. It is only buried in a network of explanation, disavowing the ethnocentric negative evaluation which prompted it. And so,

“this contextualizing move, too, can be sustained by ethical orientations uncomfortably close to those characteristic of people who would condemn cannibalism out of hand.” (36)

What also gets buried, as a result, is the possibility that the morality of a certain practice is still an open question. The impulse to contextualize can sometimes be motivated by the desire to place the offending practice beyond moral contemplation. The rationale is: this practice is obviously wrong, so how do we disarm negative reactions to it? Think of the rush to affirm that female genital mutilation is justifiable in terms of the framework of the cultural expectations of North-east African Muslim women. Think of the enthusiasm to describe the cultural significance of the genocidal Israelite ban (ḥerem) in the Old Testament conquest narratives, to ‘appreciate’ (and thereby justify?) its cultural-religious significance as a dedication to holiness. Think of the concerned attempts of many Bible Commentaries to redeem Rahab by denying her vocation as prostitute (as Daniel Hawk discusses). Gardner is right on the mark here. When the contextualizing explanation is governed by the motivation not to challenge ethnocentric attitudes, but to bracket out ethical aspects of a practice from consideration,

It is true that contextualization can often greatly enrich our understanding and challenge our prejudices. Contextualizing can fundamentally challenge any immediate gut reaction we might experience. But as Gardner shows, the human sciences can conversely be used to protect or even reinforce these very same gut reactions.