On 20 August 2012, conservative evangelical New Zealand radio station, Radio Rhema, interviewed the Associate Minister of Education John Banks about the teaching of Creationism in schools. The interview follows the recent announcement of the plan by the free-market neoliberal ACT Party – of which Banks is the party leader and sole MP – to introduce private “Charter Schools” in New Zealand from 2014, many of which will be administered by evangelical Christian groups. 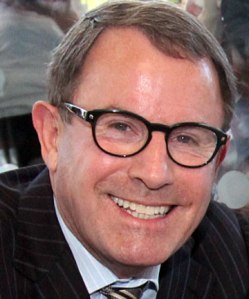 While the interviewer wanted John Banks to tell him whether he supported the teaching of Creationism in schools, Banks attempted to steer the question to his own personal belief. On the question of his personal belief, Banks agreed that he believed in the story of Adam and Eve and did not accept the scientific fact of evolution.

His answer on teaching Creationism in schools was more cagey. He refused to make a clear statement that he supported the teaching of Creationism, referring obliquely to the liberal humanist enemy – possibly the “basket-weaving, hairy-legged feminists” whom he has often referred to – who would pounce on his words (“we have to be very, very careful about parading all this…”). But his comments on presenting ‘both sides’ of the issue removes all doubt that he wants Creationism to be taught in schools as a ‘scientific’ option.

Interviewer: As the Associate Minister of Education, how do you feel about schools teaching Creationism?

Banks: What do you mean? Can you just explain it to me so I clearly understand.

Interviewer: So let me get this clear, John Banks, Associate Minister of Education, you disagree with Darwin’s theory of evolution, you believe the Genesis account of how life began?

Interviewer: Well how do you feel, therefore, about the other question: about evolution being taught in our schools?

Banks: … I don’t see anything wrong with a Christian school teaching Christianity and Adam and Eve and everything that follows.

Interviewer: And do you think there is a place to teach these opposing views equally? Darwin’s theory of evolution would not sit on an agreeable level with those who teach the six-day creation story, and vice-versa. Can two opposing views like that be taught on an equal level in our schools?

The media report that circulated today summarised that John Banks “believes the Genesis account of the start of life on Earth” and that “he has no doubts the first chapters of Genesis are true”. This summary is easily misleading in respect of such a contested passage, as Banks is consistently vague about his precise understanding of Genesis, preferring to broadly agree with the interviewer. But Banks did make an affirmative response to the interviewer’s question of whether he “believed the Genesis account of how life began”. It is not clear that Banks believes in a literal six-day creation as Gavin Rumney suggests after reading the media report, or as Hemant Mehta does, or that he is a young earth creationist (believing that God made everything about 6000 years ago). GayNZ is cynical, entitling their blog post, “John Banks Believes in Talking Devil Tree-Snake !“